Theory of the Dérive

“In a dérive one or more persons during a certain period drop their relations, their work and leisure activities, and all their other usual motives for movement and action, and let themselves be drawn by the attractions of the terrain and the encounters they find there.” Guy Debord, 1958.

It’s Thursday and the first day of work for the week. I wake up and have two eggs and toast. I drive an hour to work on the freeway. I work for 8 hours. I drive an hour and a half on the freeway to get home and relax. It’s Friday and I do the exact same thing I did the previous day. This habit of patterned boredom has taken over what was once my freedom. I think I’m an individual because not another person has my job, but in reality I am no different than the one who is also waking up, having breakfast, commuting to work, and doing the same thing the next day.

“Transportations is only a means to an end.” David Jacobs, an official guide for san francisco commuters.

The theory of the dérive is an attempt to end this pattern of boredom that occurs throughout our day. This theory is possibly the most important piece of the Situationists International concepts because of it’s theory on how to live life. A person who will dérive through a city will be open to choosing the option they would not normally choose. Freely moving through the city according to what you feel is the right direction through intuition is the ideal way to have a more exciting life. This motion of free movement through the city allows for new iterations that an individual would not normally have.

A small scale example is walking a three block commute to school, one always walks on the side their apartment is on because it’s convenient. This creates a boring habit of only walking on one side and thus experiencing the same thing over and over. If the student were to dérive their way to school he or she would choose, possibly according to the red light to cross the street parallel to school, in order to walk on the opposite side of the street. Walking on the opposite side of the street, determined by the street lights and not a means to an end, creates an alternate world in which anything can happen, good or bad. Within this dérive the student has an opportunity for a chance encounter with somebody they normally wouldn’t run into on the walk to class and can make the day a little more interesting.

Which side of the street do you walk on?

Within Architecture and the building there have been several successful attempts at creating the dérive within the building, and for that I take great inspiration from. OMA has studied the dérive through their counterpart AMO research and implied it to several of their buildings. The architect has the opportunity to influence the way the visitor moves through the building through it’s circulation path. The program of the building dictates what kind of circulation path they can create. In the Dutch Embassy in Berlin by OMA they created a defined block form within the strong defined urban fabric giving it context. Because it’s a very private building, circulation was constricted due in part to safety. In the end they created a labyrinth circulation of different thresholds based on views and experiences. This singular pathway can be seen through an unfolded plan of the building in order to show the different thresholds one goes through a building. 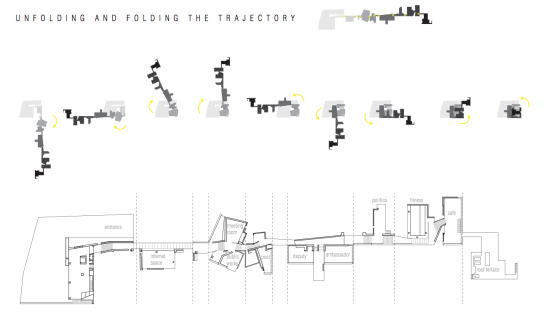 An unfolded circulation plan of the Dutch Embassy in Berlin by OMA.

The other type of dérive that OMA experimented with was the maze typology. With the Seattle Public Library they had the opportunity to create a new standard for libraries and what they can offer the public. The idea was to create two different types of experience through blocks and open space. The blocks would set the open spaces apart and have a different experience in light, ceiling height, color, and program compared to the open spaces which were covered by the overall skin. To create movement between the two spaces OMA created a maze of escalators, elevators, stairways, and ramps to move the visitor around the building in different topological points within the building. Using these different forms of circulation scattered around the building, the visitor is given several options on how they can move within the building. This free feeling is fitting with the public program of the building encouraging public access, as opposed to the Dutch Embassy which is more constricting due to its private program.

As Architects we should also be able to design a larger scale urban network of different thresholds and activities/amenities for an array of people in order to further enable dérive. Creating a network, which entails a linear connection, with nodes of interests should excite the psychogeography in a person stroll. In addition to a clear linear network there should also be ghettos of community designed projects. These outside influences could lightly connect to the main infrastructure but only be visible by the wondering visitor or the insider who lives there. It’s important to have these individual neighborhoods in order to promote neighbor to neighbor interaction and create a more safe environment.

The Theory of Derive

This entry was posted on October 23, 2012 by jonarcellana in Architecture, Situationists International.